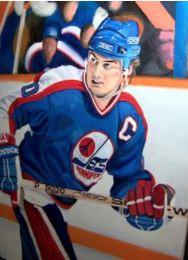 A Winnipeg artist who once lived on the street has landed a gig most hockey fans would be envious of.

But for Jamie Hogaboam, painting the portraits of inductees to the Winnipeg Jets Hall of Fame isn’t just a cool job — it’s a chance to bring attention to the issues of mental health and homelessness.

In 2015, Hogaboam was driving a cab, working 70 hours a week, and barely making enough to pay bills. In addition, he was battling mental illness.

“I was diagnosed with borderline personality disorder. And I just got diagnosed in the last couple of years,” he said.

Hogaboam says he thought about suicide, he tried to seek social assistance, but was denied. He eventually started living with a friend and learned about the Art Beat studio in Winnipeg.

“The people at Art Beat deal with people with mental illnesses all the time. ‘Cause 60 per cent of our artists, alumni artists have been homeless at one time.”

Jamie started painting again, something he’s done since childhood. One of the first things he remembers painting as a child was a cardboard cut-out of L.A. Kings goaltender Rogie Vachon, to use as a practice target.

A painting of Winnipeg-born Detroit Red Wings player Terry Sawchuk proved to be pivotal in Hogaboam’s life. When he started working on it, Hogaboam learned that Sawchuk had also lived with untreated mental illness.